Last price update was: September 26, 2020 3:15 am
× Product prices and availability are accurate as of the date/time indicated and are subject to change. Any price and availability information displayed on Amazon at the time of purchase will apply to the purchase of this product. 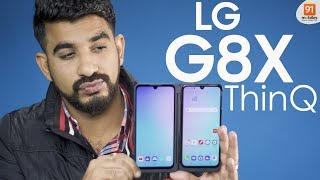 LG has launched LG G8X ThinQ smartphone in the Indian market. The phone LG comes with two screens. Actually, this phone has a detachable secondary screen. The phone was first launched at IFA 2019. Now it has come in the Indian market. The LG Dual Screen has a 2.1-inch cover display for notifications, time and battery life. The detachable screen will connect to the phone via a USB Type-C port.

The LG G8X Think has a 6.4-inch fullvision display. It has an in-display fingerprint sensor. The phone has a waterdrop notch at the top. It has a 32-megapixel selfie sensor. Camera Reflected Mode which will help in taking better portrait shots in low light.

LG G8X comes with a Think Dual Camera setup. There is a 12-megapixel primary camera sensor on the back side. It has a 13-megapixel secondary camera with super wide-angle lens. LG has given many software features to improve the camera performance of this smartphone.

Qualcomm’s Snapdragon 855 processor is used in the phone. It has 6 GB RAM. This out of box runs on Android Pie. Its inbuilt storage will be 128 GB. If required, it will be possible to use microSD card up to 2 TB.

The new LG G8X works with the ThinQ secondary display. The LG Dual Screen connects to the main device via a USB Type C connection. The size of the secondary display is the primary display. That is, it also has a 6.4-inch full-HD + screen. After adding the second display, this phone looks like a common foldable smartphone. Users can rotate the display 360 degrees with the help of a hinge. It has been promised that the phone comes with a strong build.

LG G8 X Think with LG Dual Screen is priced at Rs 49,999. The device will be available in retail outlets across the country from December 21. The phone will be sold in Aurora Black color. Remember that the smartphone was launched at IFA 2019 in September.

Be the first to review “LG G8X ThinQ” Cancel reply